Mark Mayerhofler’s rugby career sits squarely at one of the major crossroads in the history of the game in New Zealand. As a club player he played full club seasons and won a championship. Playing for Canterbury he played in a winning Ranfurly Shield match and then in the professional era played for the Crusaders, Blues and the All Blacks. Finally in the twilight of his career he played professionally in France and England and then moved into player development and coaching. Reflecting on his career he said the happiest memories were of his time with the Christchurch Club and in the Canterbury /Crusaders set up. To illustrate how special these times were he told the story of how his rugby friends came to the rescue when he had flooded his flat. “It was a Friday and I was to fly to Wellington in the afternoon with the Canterbury team so before I left a load of washing on…about 2 hours later Jane got a call to say there was water coming out of our first floor flat…we both raced home and there was water everywhere…it was so deep the cats bowl was floating…Jane started crying and I was panicking. I got Jane to ring Vance Stewart and say I would have to come up on a late flight. Cathy Stewart straight away told me not to worry and for me to catch my plane…she came around and sorted it with Jane and I caught my flight. The team came home on Sunday and there were Andy and Barbara Langley at the airport and we went and stayed with them until the flat dried out…you never forget kindness like that.”

Mark Mayerhofler’s move to Christchurch was a major stepping stone for his rugby and for himself. Educated at Henderson High and a ‘westie’ [West Aucklander] he had been playing in the North Harbour competition and was on the fringe of better things. “It was the first time I had left home…it was all a bit scary but I needed to prove myself and with Walter Little and Frank Bunce well established at North Harbour I needed to go.” The Canterbury coach Vance Stewart had determined he needed a strong mid-field presence and having coached Mayerhofler in the NZ Under 19s, albeit as a wing, and confirmed his impressions with Robbie Deans; he enticed the apprehensive tyro south. Moreover he suggested the Christchurch Club and his arrival coincided with Mike Brewer’s decision to once again put on his boots and commit himself to representative rugby.

The senior team’s results were decidedly patchy for a number of years and it was not until 2000 when the team at last won the championship. Looking back Mayerhofler said that the advent of Gordon Smith and Joe Leota as senior coaches in 1997 was significant, “Joe and Gordy were awesome coaches…the team was very happy and Joes teaching background and modern views on coaching really pushed us to another level.”

By this time however the world of professional rugby had well and truly put an end to any real involvement in club rugby. Reflecting on this Mayerhofler is very clear in his mind that he had, “…the best of both worlds…I came through as an amateur and got involved with Christchurch with its traditions and values…it was so different to North Harbour…things like the Crying Towel game and the older club members…you can never forget those things.”

Coming into the Canterbury scene was a sharp learning experience. Two personalities loomed large at this time and both left enduring learnings. Commenting on Mike Brewer and Richard Loe he said, ‘I learnt so many lessons…Bruiser [Brewer] demanded high levels of fitness and application…one night at training we were jogging through our backline alignment…I made the mistake of taking it easy and the next minute Bruiser had smashed me…I never ever did anything at training half paced again.” “Loey would pick on me at training…always testing me…if we were practising tackling he would brace just before I hit him…at touch he would be late with a shove or charge…it really got to me until someone said just give it back…so I late charged him one night and that was that.”

Like so many of Christchurch’s All Blacks he was involved in a successful Ranfurly Shield era, beating Waikato in 1994 and successfully defending the trophy. On his arrival Vance Stewart told him that he would be playing in the mid-field and his first job was to tackle. Over the next 4 years the highly successful Canterbury and Crusaders were slowly pieced together initially by Stewart and Brewer and then later by Wayne Smith, Robbie Deans and Todd Blackadder. As the success of these teams grew so Mayerhofler’s reputation developed.

Having been a regular NZ Maori representative since 1994 and then with Canterbury’s success he was seen as a possible All Black. Having missed the 1997 tour to the UK he won selection the next year playing and scoring tries in each of the winning tests against the depleted England team at Carisbrooke and Eden Park. He then appeared in four of the subsequent tri-nations tests. But in one of the worst All Black losing streaks of all time, all of these matches were lost.

His first test against England is still a happy memory, “really I was at my peak, I was fit and played at my best…I could not have done better…but it was not a good time in the All Black camp that year.” Comparing the All Blacks and the Crusaders he said that Crusaders and the Canterbury set-up were ‘all about values and the team…these teams shaped me as a person and a player’.

Injury plagued his next two years, especially a troublesome hamstring problem. He found this difficult to deal with and ended up working in isolation from his team mates to rehabilitate and get fit again. Mayerhofler wasn’t required for the All Blacks again after that, though he did make an appearance for New Zealand Maori in 2000 and went on tour with the Maori to Australia in 2002, playing the unofficial test against the Wallabies. Commenting on his time as an All Black he said, “I was not unhappy…I got there and played my best game of my life but I could not go to the next level.”

At the end of 2000 he moved to France, but did not settle and returned for the 2002 season, going back to North Harbour. He played 11 appearances for Harbour, 10 for the Blues in the Super 12 and toured Australia with the NZ Maori and then took up a contract in England before time and injuries caught up with him and he came back to New Zealand. 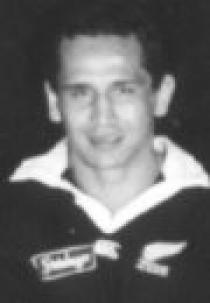