Alan Robilliard’s recollections of his two major All Black tours are remarkable for the clarity of his recollections on the controversies of those tours, his deconstruction of tries he scored and breaks he made. These interviews were printed in The Press in 1983 and while the remembered events were over 50 years past Alan Robilliard’s descriptions were not only incisive, but also deeply loyal to past team mates. Perhaps it was his trade as a jeweler that helped train his thinking but there is little doubt that as a winger he was among the very best the club produced - fast, and calculating, with a nose for the try-line.

Alan Robilliard was injured in the second game of the 1924 Invincibles tour, suffering a broken bone in his foot. He recovered in time for the final third of the tour but did not play a part in the last nine games. Explaining this many years later he recalled, without a trace of bitterness, that the reason was very simple, “They were chasing the unbeaten record then, I don’t blame them. Sure there were a few grizzles over there among those not being played. But they were winning - that was the main thing.”

Robilliard was 21 years old on the tour and his rise to All Black status was swift.

He had joined Christchurch in 1920 having moved from Ashburton where he played in the Ashburton High School 1st XV as a half back, and after two seasons in the Junior team he was promoted to the seniors and made his debut as a 19 year old. He was selected for Canterbury, as a winger in the same year and the following year was in the trials for the 1924 tour.

Reflecting on his dramatic rise Robilliard was candid, “I flunked it into the 1924 trials. I didn’t have much to do and I couldn’t do much wrong, as I hardly got a pass.” Injured early in the tour he was one of a clutch of players who dropped out of favour and were selected infrequently. It was Robilliard’s lot to knuckle down and as stay loyal to his team mates and this he most certainly accomplished.

Returning home he continued to excel for Christchurch and Canterbury. In 1925 he was back in the All Blacks and in 1926 he was the leading try scorer on tour of Australia but did not play in the tests. In addition to the 7 tries he scored in Australia he also touched down 10 times for Canterbury and set a new record for Christchurch with 20 tries. This mark was to stand for 20 years.

The 1928 tour of South Africa was to be both the highpoint and a sad end of his rugby career. His form in the North v South match in 1927 was outstanding and he was clearly the best wing in the country. Indeed such was his superiority that he was one of 16 players selected as ‘certainties’ and so did not have to attend the final trial.

On the tour he played on the wing in all four tests and was the second highest try scorer with 6 tries. This was a ground-breaking tour for New Zealand and it was to prove extremely arduous with tiring train travel, hard grounds and the physical nature of the South African game combining to tax the tourists. Recalling the tour Alan Robilliard said, “It was very hard going all the time, particularly as I didn’t get to play in many of the easy games. I found it very hard to get past the defence - you would beat a couple and then there would be another couple in front of you.”

This rugged and determined defence was to take its toll on Robilliard in the fourth test. Racing for the line he was pinned in a two man tackle, “I was swung opposite ways and my knee went crack. I gave it a go, but the knee kept locking, and buckling in. I got the cartilage out but it didn’t seem to do me much good.”

And at the age of 24, after 65 first class games, Alan Robilliard retired but this did not end his involvement with the Christchurch Club or the game. He continued to serve on the management committee and was at times Assistant Treasurer, Secretary and Deputy Club Captain. He coached at a number of levels, giving “something back to the Club”. In recognition of this lengthy contribution it was entirely fitting that he should have been made a Life Member and this honour was accorded in 1942.

In 1983, reflecting of a life in rugby, he was asked about the supposed split in the 1928 touring team which, according to some sources, was between Maurice Brownlee the captain and the vice-captain Mark Nicholls, a man noted for his forthright views. Commenting, Robilliard said, “There was one [a split] - in the papers”. But there was nothing in it. Certainly they didn’t get very close to each other but they were different types.” Having put this tale to bed he then went on to recall a moment when the - at times autocratic Nicholls did not get it right.

Having come on to the field as a replacement in the 1925 match against NSW Robilliard found himself with ball in hand, “well I had only just got out there when I kicked the ball downfield and went to follow it up. Mark yelled to me ‘watch your line Robbie’, and I hesitated a bit at that. Then I went after it and scored; if I’d listened to him they’d have got the ball and cleared it.”

This recollection is interesting in itself. It may only be conjecture but for the young Robilliard, recently returned from the’ Invincibles tour it was a pivotal moment in his career. Would he follow instructions from one of the dominant figures in All Black rugby at the time or would he be his own man and seize the chance? For a split second he paused and then chose his own strategy, succeeding and in doing so possibly ensuring his own All Black future.

Alan Robilliard’s brothers both played for the Christchurch Club and his nephew, Ross Smith, was to continue the family tradition as an outstanding winger in the 1950s and 1960s. 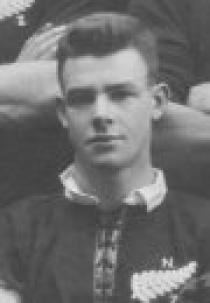