Ruk Wainohou described Tiny Hill on the field as “absolutely terrifying.” The majority of photographs of Tiny Hill show him as a marauding, vengeful warrior almost invariably storming around a scrum or a ruck, wreaking havoc on the opposition. His contemporaries say that the tougher the match the tougher he played and of his 11 test matches the three he played against the South Africans in 1956 were the toughest. Recalling the first test at Dunedin he talked of the power of the Springboks forwards and the strength of the props Newton Walker and Becker. By the second half the All Black prop Mark Irwin had been injured and with no replacements allowed it was certain that one of the loose forwards would have to go into the front, “…the last bloody place I wanted to be in’, said Hill, “so I eased my way over the sideline and with the crowd at the grounds edge I sort of ducked, hoping not to be noticed.” Meanwhile the medics had ascertained that Irwin would have to leave the field and Bob Duff, started to look around. “I knew he was looking for me…so I went a bit lower, hoping John Buxton would get the call into the front row…suddenly Maurie Dixon starts yelling out… Bob are you looking for Tiny? He’s over here.” Pausing in the story Hill raises his heavy eyes and smiles, “I could have bloody well killed him and of course being Maurie… well he just laughed.”

Responding to a question about how he got on in the front row his eyes narrowed slightly and there was the sense that he was again on Carisbrook and in the thick of the battle. “I was never going to be strong enough to prop properly, in fact Becker kept dropping his shoulder so Ian Clarke changed sides… so I decided to smash into every scrum as hard as I could and in that end that worked…mind you we lost and the buggers dropped me for the next test.”

During the course of an interview Hill steadfastly refused to name any one person who had influenced him or who he had admired/respected as a player. However as his life in rugby unfolded it became clear that perhaps the most influential figure in his rugby career had been another stalwart of Services and the Christchurch Club. Over a period of almost 2 hours he studiously warded off any suggestions that he had a mentor but as we backed out of his drive way he came over to the car, leant in the window and, “Pat Rhind helped me the most” and in a way this was not surprising because a quick search of teams and selectors shows that Rhind, firstly in J Force, then at the Christchurch Club and then in Combined Services rugby was just a step away from Hill. Indeed were it not for Rhind, Hill may well have ended up in the Australian army while he was in japan.

“A group of us had heard that the pay for Australian servicemen was higher than ours so we asked a few questions and decided we would enlist with the Australians…somehow Pat Rhind got wind of this and confronted Hill and his mates. “He told us it was a stupid thing to do and that we would be much better to stick with the NZ Army. So we stayed.” Within a year Hill was based at the Godley Head camp and playing for the Christchurch Club.

He well remembers the Worcester Street club rooms and the rush to get a beer after the match. “Only four of us didn’t go to Christ’s College or St Andrews so we stuck together a bit…to be honest we didn’t have much money and after a while the other guys would shout us a jug or two…it was great fun.” His first game for the club was in the senior reserve team and he had a great day, running through the opposition with ease. Thinking this was the grade for him he got a shock when he was confronted by Pat Rhind and Garth Scott, the club captain. They told him in no uncertain terms that he would be playing for the seniors on the side of the scrum against Technical and would be marking the redoubtable Doug Herman, a player with a reputation for hard play. In the course of the game Herman chanced to trap the ball with his foot and Hill let fly, attempting to kick the ball free. “Doug was not happy and all hell let loose for a while.”

Hill’s displays for Christchurch soon attracted interest and in 1951 he was selected to play Buller. This was the beginnings of a strong Canterbury team and in 1953 Hill was part of the team that beat Wellington for the Ranfurly Shield. This was a great era and for Hill the attacking flair of the Canterbury team was “how rugby should be played.” In the thrilling drawn match it was Hill who changed the course of the game in the closing minutes by charging down the side-line then flinging a pass deep in field where Pat Vincent took off and eventually Derek Mayo scored.

In 1955 he made his All Black debut against Australia but was not happy with his own play or the tactics of the All Blacks. Indeed he went far as to say to Bob Duff, “if this is All Black rugby you can stick it.” Fortunately he decided to lift his own fitness for the Springboks and went on to play in the three of the tests. In 1957 he was vice captain on the tour of Australia and in 1959 played in four tests against the British Isles as a lock. At the age of 32 he decided to retire from International rugby but played for Canterbury and then Counties until 1962.

In 1975 he returned to Burnham and was quickly snapped up by the CRFU to coach the Canterbury team. On his arrival it was made very clear to him that the Union were not happy with Grizz Wyllie and that Hill’s first job would be to drop him. He determined that he would not do that but would get to grips with Wyllie and sort things out. A Canterbury player of the time recalls Hill’s initial meeting with the team and his method for putting Wyllie in his place. “We were at Lincoln, early in the season and Grizz, as usual, had a group around him. Tiny was working his way through the team introducing himself and he got to Grizz’s group. He went around shaking hands leaving Grizz to last. He then walked up to him and pushed his finger into Grizz’s chest saying, ‘I know exactly what you are up to and I’ll be watching you.”

He succeeded in bringing a sense of order and purpose to the team and they responded by winning the national championship in 1977. It is worth noting that two other Christchurch men, Derek Arnold and Gerald Wilson, shared coaching duties with him and both struggled with Wyllie and the older players. Perhaps it was Hill’s toughness, his reputation and his military training that gained him the respect of the strong willed Wyllie. In the time-honoured way he went on to become a South Island and national selector, his term coinciding with the Cavaliers tour of South Africa. Recounting this he took great pleasure in his work on the panel for three years and in particular the victory of the so called ‘baby All Blacks’ against France in 1986, “they went out and got stuck in…they gave it everything.”

And that may well have been the creed of Tiny Hill’s notable rugby career. 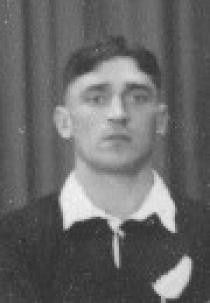