Scott Cartwright followed in the great tradition of Christchurch wingers from Frank Fryer to Alan Robilliard, to dashing George Hart, to Ross Smith and then Bill Birtwistle. All were pacy and all knew their job was to score tries. In 47 first class matches Cartwright scored 41 tries, a ratio that compared well with his predecessors. It may only be conjecture but all, perhaps Fryer apart, had a moment when they lost a little magic - the touch of confidence and even arrogance that distinguishes the great from the average. For Scott Cartwright this was to come after the 1977 match between Canterbury and the touring Lions. With only minutes to go and the Lions on attack close to the Canterbury line David Miller, the referee, blew a penalty and ran 20m across to the goalposts and penalised Cartwright for being off-side. It may have been technically correct but it was a theatrical ruling and it cost Canterbury the game. In 1978 he trialled with the seniors at the start of the season but withdrew before the season began. Reflecting on this in 2012 Cartwright admitted ”it had got to him a bit” and for his fellow Christchurch players there were plenty of examples, in the club matches that followed, of the callous and unthinking rugby public dishing out abuse at a player whose skills were at another level and whose rugby intelligence was deep. Such is the nature of rugby in New Zealand but it is an unpleasant memory.

Scott Cartwright was born in Christchurch and began playing for the Christchurch Club from an early age. The only interruptions were to play for St Andrews and this he did through the grades, being in the 1st XV in 1970 and 1971. The latter team was an especially talented team and won the local College competition. Until this season his rugby had mainly been played at first five-eighths but the coach, John Irving had the talented Paul McEwan in the squad and when one of the wingers was suspended Cartwright took his spot.

On leaving school he re-joined the club, playing for the Under 19 team then under the guidance of Derek Arnold. He scored over 200 points in the season and thoroughly enjoyed Arnold’s coaching. This contact was renewed in 1975 when Arnold was coaching Canterbury and Cartwright was making his debut for the A team, scoring a hat trick of tries in only his second game against Wellington. The Arnold lessons on back-play and rugby in general were many, “stay on your feet…don’t get involved in tight play -ever…plan and practice all your moves - someday you will use them.”

In 1973 he trialled for the senior team but missed the cut and played the first game of the season for the Senior Bs. At this point he was ambivalent about playing rugby. First choice winger Dave Clayton broke a leg and suddenly Cartwright was in the top team and in his first game he scored a hat trick against New Brighton and in his second game scored 4 tries against Suburbs. As the season went on the tries kept coming and by seasons end he had established a new club record, with 21 tries. He said, “any doubts of giving the game away disappeared and it was great fun playing with talented backs.” The following season he tapered off slightly with another 16 and despite his light build was clearly a player on the way up as witnessed by his inclusion in the Canterbury Colts team for two years and in 1973 scored 2 tries for Canterbury B against Buller.

In 1975 he was in Picton when a friend warmly shook his hand and congratulated him. “What for?” said Cartwright, “for getting in the Canterbury team…you’re playing Otago on Saturday.” After getting over the shock he travelled to Dunedin and although Canterbury lost he scored a try.

The following year was one of major progress. His Christchurch team completed a hat trick of senior championships but Cartwright only scored 4 tries, a reflection on the tightness of many of the victories. He was selected for the NZ junior team for a six match tour and scored 7 tries, three in the first game against Mid Canterbury. Recalling this effort he chuckled at the memory.

“By coincidence the races were on at Ashburton and our hotel was over the road. Eric Watson had given us the time for training so I thought I would pop over for a couple of races. After a while a message comes over the loudspeaker and its Reon Murtha asking if Scott Cartwright is here would he please go back to the hotel. Eric was steaming and he sent me off by myself to run around the field while he hammered the rest of the guys. Every few laps I would ask him, ‘another lap Eric? and he would tell me to keep going. He ran the team into the ground and I was still fresh enough to score three tries!”

The next highlight was selection for the South Island and this really was the trial to pick the team for Argentina. He had a good game and scored a breath-taking try as described in the match report, “…Scott Cartwright was probably the find of the game…His speed on the left wing was exceptional and in scoring a try in the sixtieth minute he left Rowlands grasping for air with a superb shuffle and side-step. Selection for the ground breaking tour of Argentina followed and he played 7 matches, scoring 8 tries and playing in both unofficial tests. ‘It was a great tour, well coached and well led but I damaged my knee and needed an operation when I got back home.”

Cartwright played another 13 matches for Canterbury in 1977, including the narrow loss to the Lions, and scored eight tries. He also appeared in an All Black trial. He did not play in 1978 but responded to an SOS call the following year and played for both Christchurch and Canterbury. 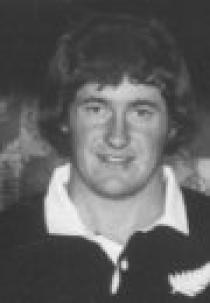