Jock Hobbs’ rugby life - from player to administrator covered some of the most turbulent years in the history of rugby in New Zealand. Jerry Rowberry and Tony Murdoch were privileged to interview Jock for the 150th jubilee history shortly after the Rugby World Cup. His health was not good and his life expectancy was not great. It was a memorable evening lasting over two hours and touching on all aspects of Jock’s life in rugby. At one stage of the interview he paused and gazed somewhere into the distance and said, “…you know I never stinted on the social side of things and in my mind’s eye I can still see Bangor Street, the old clubrooms, and the great fun we had all those years ago.” And it was this memory that seemed to capture the essence of the Club’s fourth All Black captain. Having played to the very highest levels and achieved so much in rugby he still retained the deep affection for the Christchurch club that Millton, Manchester and Duff retained all their lives. A Christchurch man to the very end.

Jock Hobbs joined the Club in 1978 after a highly successful stint in the Christ’s College 1st XV. The 1977 College was very strong, one of the best in the school’s history, and Jock along with Vaughan Brown and Nick Archibald found themselves in the Under 19s coached by Kit Chambers and Dennis Waller. It was a good year with the team, led by Jock, finishing second in the competition and, not surprisingly with Kit Chambers at the helm, living life to the full. The next year after an impressive series of trials he was selected in the senior team, coached by Russell Skerrett and captained by Jerry Rowberry.

This was the start of a senior career that carried through to 1986 when he left to work in Wellington. As was the case in those pre-professional days, senior rugby served as an apprenticeship to provincial rugby and then for the few to the All Blacks. The Christchurch team of 1979 featured six players who were or would become All Blacks, a scattering of Canterbury players and a hardy group of experienced club players. The team reached the grand final and narrowly lost to Old Boys in a gripping match. The next year the team won the first round trophy and in 1983 under Jock’s leadership won the first round again.

Jock’s memories of the various senior combinations during his time covered the competitive nature of the trials, the in-team rivalry for a playing spot and the quality of players. He said, “These teams were full of good players who all trained hard and understood their jobs on the field.” One of his favorite memories was of the 1981 team which he captained. On one particular night there was only one ball and the backs had commandeered it. Not daunted, the coach, Peg Wairau, instructed the forwards to practise their line-outs without a ball. Dutifully the forwards assembled and went through the mime of throwing in, jumping, binding and driving. On the third occasion Mick Powley mimed the throw in and nothing happened. Mystified, Peg demanded to know why Blue Mika had not jumped. “Not straight, Peg” said Blue, much to the amusement of the rest of the pack.

In the same season the team had organized a bus trip. Everyone was to meet at the clubrooms at 7.00 before heading out into the night. After a while it became clear that someone had forgotten to book the bus! Undeterred Jock grabbed chairs and set them out in the shape of a bus interior with him as driver. Rules for getting on and off the bus were quickly established; a roster of performers and songs set down and a night of great hilarity followed. In some ways it had been a testing season but Jock’s determination to finish the year appropriately won the day.

In 1980 he was picked for Canterbury for the first time but broke his arm against Marlborough. By this time the characteristics of his game were beginning to come into place. Always supremely fit, he began to develop upper body strength and with his keen intelligence backed by a deep well of courage he became an incisive tackler and a master of securing ball on the ground. These skills perfectly fitted the Canterbury style and after battling Kerry Flood for the open side flank position he eventually established himself as first choice and so impressive was he that in 1983 he was elected for the All Blacks to play the touring British Lions team. Looking back, Jock said he was a surprise selection and felt that Andy Haden played a part in his selection because Andy told the selectors that he could “not get over the quality of Jock’s work on the ground.”

Clearly though, the success of the Canterbury team in winning and retaining the Ranfurly Shield in 1982 was pivotal in pushing Jock into consideration for All Black selection. By 1985 this Shield tenure had produced 13 All Blacks and will remain forever in the hearts of the fans that supported them because of the verve and commitment of the players. For Jock this was a golden era for amateur rugby, “perhaps the last” as he said. The team was a close knit group; friendships grew from this that endured and even in the gripping ‘match of the century’ against Auckland the packed crowd at Lancaster Park marvelled at the brave comeback to lose narrowly 23-28.

In 1984 Jock captained the All Blacks on a short tour of Fiji and in subsequent years captained the team on tours of Argentina and France. In 1985 he toured South Africa with the rebel Cavaliers team. It was a decision he wrestled with and there is a hint of fatalism in the explanation he gave in the Axeman of the same year. “It was a very difficult decision which I agonized over for several months.”

At the conclusion of the interview he wrote, “I believed the last game in South Africa was indeed my last game of rugby. I was aware, as we all were, of possible repercussions on our return. We did not return with the idea that our positions in club, provincial or international level would be available to us. If these positions are regained by some, well and good; if not, it was a memorable experience.”

Hobbs admitted some years later that going on the tour was something he had come to regret and was a mistake. A cynical view of this was that such a statement would enhance African support for New Zealand’s World Rugby Cup bid but this may be an unworthy thought.

After the tour of France in 1986 he began to prepare himself for the inaugural Rugby World Cup, to be held in New Zealand in 1987. He felt he was at the top of his form. “I felt that I was playing my best rugby in 1986... I was injury free and fit. In a way it was the culminating point of my playing career and I was really looking forward to the World Cup”.

Jock’s final season for Christchurch was in 1986 and the Annual Report of that year noted his departure saying, “It is with regret that we farewell Jock to his new job in Wellington. Despite Jock’s heavy commitments to other things he has at all times been available to help when required. The Club wishes Jock, Nicky and Emily all the best in Wellington.”

Sadly this was not to be and after becoming concussed when playing for Wellington against Auckland early in 1987 he was forced to retire. Looking back on this unfulfilled ambition Jock graciously acknowledged the new star of that year - Michael Jones. “He really was the complete footballer… a special player… the best in the world”.

Rugby players the world over understand the sub groupings within teams. There are the props, the wingers and, of course, the half backs. Jock was an integral member of a close knit group of players who called themselves ‘the loosies’. With Ray Waghorn, John Mills and Peter Fyfe, ‘Frank’ as his conspirators called him, enjoyed plenty of fun. John Mill said that they called him Frank after a character in Hill Street Blues and seldom called him by his given name. This group met up annually and this close friendship shaped at the clubrooms grew over the years into something special.

John said, “Of course we showed him no respect and as he rose in the world of rugby this occasionally irked him … he blamed us for his cauliflower ear and this may have been fair enough as we told him to play when he already had a damaged ear”. Jock’s great stamina on the field was not matched socially and he gained a reputation as an early fader. His evenings usually began at pace but as John Mills said “invariably dropped in intensity.”

This great friendship had a lovely mid-point when Jock received his NZ honour. In addition to thanking his family, he warmly acknowledged his fellow loose forwards for their loyalty and support. “Mind you”, said John Mill, “he never forgave us for making him play Number 8 when he was an All Black flanker.”

Our interview moved to cover the other aspects of Jock’s life in rugby and especially his part in two of the major crises of the past 30 years. He admitted he had made a mistake going on the Cavaliers’ tour and was not proud of deceiving people who he admired. He told of the battle to save the All Blacks in 1995 and how certain players were prepared to hold the All Black traditions to ransom. He wryly told of Sean Fitzpatrick, a key figure in the intrigue, shaking his hand, saying “No hard feelings Jock”. Recounting this exchange he said, gently but with some conviction, “You would think he would have at least had the decency to say thank you given the size of his new pay-packet”.

Commenting on his return to chair the NZRFU in 2002, he glossed over his earlier rejection by the same body and moved quickly to talk of the values that he wanted the Union to adopt so that it could move forward. “Things were not good…There was a need to get the organization in better shape and to set down some core values… we had lost our way somewhere along the way and I was determined we would pull it together to become one team.”

The hosting of the World Cup and then the All Blacks’ victory were the end point in these plans. He was much admired at the NZRFU headquarters and players such as Richie McCaw appreciated his advice and encouragement. 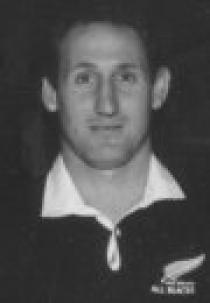