Harry Frost’s sole match for New Zealand was in 1896 when he was called in as a replacement for James Swindley. A forward he usually played hooker in the 2-3-2 scrum and was a tenacious and conscientious player who never stopped trying or let his teammates stop either. The selection suggests someone who is steady and reliable - able to step into the breach, and perhaps this was Harry Frost. Even this name suggests a solid character and his later life in rugby is something of an echo of his playing days, for his real claim to fame was as an administrator and after moving to Auckland where he rose through the ranks to become President of the NZRFU and later was recognised with life membership - the first NZ representative to be so honoured. His administrative education began at the Christchurch Club where he held a number of positions over the years. For several years he was Club Captain and was also the skipper of the senior team. During the 1890s this team gradually improved to be runners up in the competition in 1899 and then outright winners in 1900. One could imagine Harry Frost’s delight at this success.

Harry Frost was educated at Riccarton and Bromsgrove House Schools but did not begin playing rugby until he was 17. It is not certain when he joined the Christchurch Club but it would appear it was in 1885. From the time he made the senior team he was a regular in the team lists, which in those days were published in The Press in the days prior to each round. This beginning was really only a toe in the water in terms of his life-time commitment to the game and to the Christchurch Club.

At the time of his death in 1954 the Annual Report for that year read as follows, “The committee records herein Mr Frost’s long and valuable service since 1885 as a player, an officer and a member of particular value to the Club. He was deputy captain in 1890 and 1891; he was club captain in 1893, 1894 and 1897. He captained both his club and Canterbury representative teams. He represented his province no fewer than 39 times and played for New Zealand in 1896. He sat on the Auckland Union committee for some 18 years and was Chairman for ten years. He was the President of the NZRFU in 1925 and later was accorded the unusual compliment of life membership. In rowing and in other sports in Christchurch, Mr Frost gave outstanding service.”

He was already prominent in Christchurch Club affairs when he made his rep debut in 1890 and by 1893 was a member of the CRFU’s executive committee. This was not entirely unusual because both John Anderson and William Millton had combined active play with administrative duties but perhaps Frost was a more ambitious and driven man because his business career with the South British group was successful. By comparison both Millton and Anderson came from wealthy backgrounds. Certainly his administrative work after his retirement from active play was notable for the diversity of the sports he supported and the longevity of his service.

His favoured position was at hooker in the two-fronted scrums of the day but it is not certain that he played in this position in his only test. AC Swan’s ‘History of NZ Rugby’ sets out the teams in positions and it would seem from this diagram that he was not in the front row; yet the generally accepted view is that he won his All Black call-up in 1896, replacing Auckland rake James Swindley when the latter was unavailable for the Queensland match. The weather in Wellington for the match was terrible and within minutes the players were ‘hard to recognise’. In such conditions the All Blacks didn’t play well but were thankful to win 9-3. Match reports of the game make few mentions of Frost’s efforts but in the Evening Post’s review he is grouped with three other forwards as “having played well.”

Frost played 39 matches for Canterbury up to 1901 and often led the side in the latter stages of his career. Sadly there are few mentions of his play as an individual but there is a sense that he was a member of a robust Canterbury forward pack that were adept at “spirited dribbling rushes” and continually sought to “push forward, restricting the oppositions options.” It should be noted that the Press’s match reports in the 1890s could be very critical of individuals, especially backs, but in general the forwards were seldom singled out.

When he finished playing Frost took up the whistle and was soon one of Auckland’s better referees, rising to first-class standard in 1906, and he was a key figure in re-establishing the Referees’ Association after the 1911 schism which split that body apart. Frost was the Auckland RRA’s inaugural president and was made a life member in 1913. He also coached the College Rifles senior team to a title in 1919.

Perhaps his years with Christchurch made him an advocate for bright rugby. Frost was one of the committee which drew up the ‘Auckland rules’ - designed to counter the attractions of rugby league - during the war. These modifications were so successful that they continued to be used, with dispensation from the NZRFU, until the mid-1920s.

In addition to his lifelong contribution to rugby, Frost also worked for cricket, rowing, swimming and athletics. In his will he left 250 pounds for the club, a substantial amount in 1954 and this greatly assisted the club in the purchase of the Bangor street property and that was Harry Frost, loyal to the end. 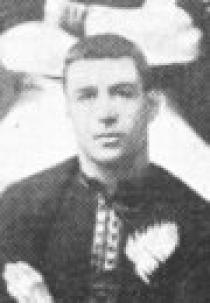