Amidst the dusty archives of the Club are the minutes of committee meetings held during World War II. Late in 1944 there were a series of discussions over a request from the Hart family who wished to donate a trophy in memory of George, their beloved son, who had been killed in the bloody fighting at Cassino in June 1944. Despite the formal tone of the letters and the brevity of the minutes there is an aching sense of tragedy in these entries, with George’s grieving parents seeking to keep their son’s memory alive and the club committee attempting to support them. Such is the tragedy and futility of war and such is the transitory nature of memorials that sadly The George Hart Memorial Trophy is no longer, lost somewhere in time. This is a pity because of all the great Christchurch wingmen George Hart may well have been the best, captivating crowds with his dash and delighting teammates with his try scoring ability.

George Hart was born in Christchurch and like a number of his contemporaries attended Waitaki Boys High School being a member of the 1st XV in 1924 and 1925. He quickly found his way into the senior team and in 1927 was selected for Canterbury B. In a way he was fortunate to have joined the club at this time because in addition to a vigorous and formidable pack the backs were talented and skilled. With the dynamic Tommy Mullan at half back and the astute Neil McGregor directing play there were plenty of try scoring opportunities for Hart and he capitalised on every chance, eventually scoring 80 tries for the club over his 11 seasons.

He began playing at 2nd 5/8th, outside McGregor, but his pace and the absence of Alan Robilliard in South Africa saw him moved to the wing and it was here that he excelled. His build may be described as chunky, standing at around 1.7m and weighing in at 76kg he was a powerful sprinter winning the national 100yd championship on a muddy Dunedin track in 1931 with a time of 10.4 seconds.

While some sprinters struggle to transition to rugby, especially on attack, Hart possessed the full repertoire of the wingman’s ploys. One newspaper report reflecting on his career said of him after his first test in 1930, “…he made a fine impression with his change of pace…This deceptive switch remained one of his greatest assets. He would approach a man at full blast ease off just as his opponent was setting himself for the tackle and then step into top gear again in a swerving burst that was always difficult to counter.”

Former All Black player and coach Jim Burrows writing in his autobiography, Pathway Among Men, described Hart as poetry in motion. “He could ignite a crowd running down the side-line like a wild deer. The crowd knowing exactly what was going to happen would wait for him to veer infield, then watch the opposing fullback check his pace and would roar with delight as George would veer out again and race around to score.”

Whether it was for Christchurch, Canterbury or New Zealand, Hart displayed these skills and became a prolific try scorer. In addition to his 80 tries for Christchurch, including 21 tries in one season, he scored 42 tries in his 39 games for Canterbury and for New Zealand he touched down another 28 times. He was fortunate that both Christchurch and Canterbury favoured an attacking game and that he played with talented men in both teams. His first test was against the Lions in 1930 and he scored in this and the next test. From this point on, and injuries allowing, he was a first choice winger.

In 1932 he toured Australia but injuries restricted his appearances. Returning in 1934 he enjoyed a better tour and was the second highest try scorer and played in both tests. Not surprisingly he was selected for the 1935-36 All Black tour of the British Isles and Canada, playing 20 games including 3 internationals and scoring 12 tries. Surprisingly he was omitted from the test match against England which the All Blacks lost by 13-0 and which has become known as Obolensky’s match because of the two tries scored by the European-born centre.

The conventional view of Hart’s dropping for this crucial international was that he had lost form. This derives from the book written by Charlie Oliver and Eric Tindall, both members of the touring team and is generally supported. However, Terry McLean, in his book Rugby Legends, advanced the view that Hart along with Joey Sadler and Jack Griffiths was dropped because they came home late from a New Year’s party a few days before the test. All three had played in the previous tests and were the undoubted stars of the backline. In addition George Hart had dominated Obolensky in the early match against Oxford University and even if his form had tailed off he still possessed the experience to match the flying Russian.

He retired from international and provincial rugby in 1936 and moved to Tauranga. There were some who thought he still had the requisite skills for top rugby and their optimism was perhaps justified when reports came back from the Middle East in the 1940s that he was still an outstanding player in the NZ Armed Services team that played the Springboks in Egypt. 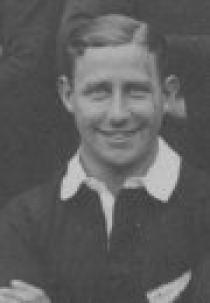