Some time in the late 1970s Derek ‘Bluey’ Arnold attended a training session for the Christchurch seniors. The setting was Fendalton Park and it was mid-season - the instigator was Jerry Rowberry, player coach at the time, who may have been anxious about the back play or may have thought the backs needed something different. For the author the impact was far-reaching not least because Arnold was a back coach, a specialist, who from the outset demonstrated an understanding of back play and of the thinking process around the business of scoring tries and defending. On that night he pulled apart the way the backline was standing both on defence and on attack, he dissected the passing techniques so that the players understood the merits of passing the ball end on end and when to use the spin pass and he challenged them to see the field in its totality so that they understood ‘when a try was really on.’ It was in essence a coaching master-class. Reflecting on this encounter before interviewing Arnold provoked the thought that it may have been a ‘one-off’ - a show piece exhibition that had been done before but as the interview went on it became clear that the sometimes mercurial Arnold had a strong grasp of the game and especially of back play. The question that nagged over the succeeding weeks was why this great pool of knowledge had not been used more extensively utilised?

By coincidence interviews with Bruce Watt, Tiny Hill and Scott Cartwright helped piece the story together and provide a partial answer to this dilemma and it emerged that perhaps the reasons why Arnold’s All Black career was glittering, but brief, were echoed in his coaching stints. This is not to denigrate Derek Arnold because he was without doubt one of the most brilliant backs in the Clubs history and his record for Canterbury for almost a decade was outstanding.

There is no doubt the coaching philosophies he so strongly advocated were forged in part, during his formative years at the Christchurch Club. He was encouraged to the Christchurch Club by ‘Nip’ McAuliffe a teacher at West Christchurch High School who put Arnold in touch with Ken Allsop and in 1959 he was in Alan McCall’s Under 20 side. The following year he was called into the seniors and played under the former Kiwis and All Blacks Ron Dobson and Pat Rhind, Dobson especially was strongly in favour of playing bright and open rugby. In 1961 the team was coached by Jack Morten and if anything he was a louder voice for attacking rugby. Reflecting on these influences Arnold was to say that Ron Dobson was a very good coach of backs, early in my first season he said, “Blue I am not going to try and coach you…do what you [expletive] like…but remember the team.” Maurie Dixon, also a back, took the same view when Arnold played for Canterbury and said the same thing and also reminded him of the importance of thinking about the rest of the team.

This determination to brighten up the game was a reaction to the over-reliance on forwards to win matches but Arnold said that this was because of the laws at the time and to prove his case he cited the famous game between the Barbarians and the All Blacks at the end of the 1963 tour. “If you look at the scores of the tour matches there were very few tries scored…this was because the laws allowed the defence to stand up very flat…when we played the Baa Baas the teams agreed to keep 10 yards apart…and as a result our backs cut loose.”

When he became co-coach of the Canterbury team in 1975 he struggled to get Alex Wyllie to free the ball from the back of the scrum. This may have been the cause of his falling out with the Canterbury players, a number of whom he had played with. Arnold’s belief in freeing up ball for the backs was paramount and he preferred a wide ranging game. Wyllie had by 1975 certainly slowed and was not keen on going too far from the base of the scrum and the non-selection of the talented Alwyn Harvey hinted that there was no place for Arnold’s expansive style.

As a player Arnold was variously described as brilliant, eccentric, brilliant but wayward and sometimes just plain frustrating. Terry McLean pondered that with a little consistency he would be on the same plane as the legendary Bert Cooke. The 1964 Rugby Almanack, not a publication that took kindly to Christchurch All Blacks, named him as one of its players of the year and wrote, “We have no hesitation in naming the brilliant Canterbury centre, DA Arnold, quick thinking, enterprising, pacy with the ability to slice through a gap; he has the characteristics of the great AE Cooke.” His Christchurch team mates were universal in the view that on the field he could do anything - he kicked with both feet, place kicked round the corner before anyone in town and could drop kick from anywhere. They were equally unstinting in praise of his defence saying he was always ‘gutsy’ and had such speed and anticipation he could defuse opposition attacks well before they gathered momentum.

It was, however, his defence that appeared to irk Fred Allen. Like his great friend and eternal fellow prankster, Bruce Watt, he was to fall foul of Allan after the All Blacks UK tour. Despite having played four of the internationals at either 2nd five-eighths or centre, Arnold was jettisoned firstly for the relatively unknown John Collins from Poverty bay and then for Ray Morten and at centre by Ron Rangi. After a brilliant display against Auckland in the same season Arnold was called into the reserves for the final test against Australia but was not wanted again. Nevertheless he continued to play for Canterbury until 1970 and made a number of appearances for the South Island and in NZ trials.

By his own admission Arnold says he was not too diplomatic with Allan and had several terse encounters. After the 1964 inter-island game he marked John Collins and harried him successfully. After the game Allen said to Arnold, “Ginger, you little bastard…you were off-side all day.” To which Arnold reportedly replied, “The only reason you are pissed off is that I killed your wonder boy.”

And as Bruce Watt said, “that really was about it for Blue.”

Conversation with Arnold is mixed with a number of great rugby stories. Some his best involved the so-called “Crying Towel” games with the Linwood Club. Invariably these have involved two of the leading protagonists, the legendary Fergie McCormick, and the equally legendary, but for different reasons, Roger Mahan. Arnold’s instructions to Mahan were simple, “annoy Ferg and he’ll spend all day chasing you, which suits us.” According to Arnold, Mahan took this seriously and in one match punched Ferg in the tunnel as they ran onto the field and in another grabbed hold of McCormick’s hand, again as they ran through the players tunnel. The reaction was of uncontrolled fury which Arnold, among others, kept fuelling throughout the match.

When he finished playing he coached the Christchurch Under 19s but was considered to be too close to the players to be given the seniors at the time. He had a season with Suburbs and after his spell with Canterbury ended he coached in England. 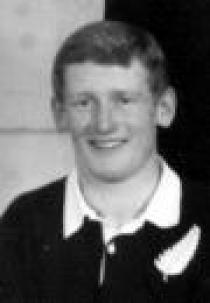