For many members of the Christchurch Club memories of Beau Cottrell are of him as an administrator, the club president and later the patron. By the 1960s his playing days were long ago but he was a very real presence in the club rooms for more than three decades - a distinguished almost patrician figure, immaculately dressed and always a man of some presence. It was said that he kept a close eye on proceedings and a few years ago Dave Wilson and Alan Trent chanced to have a conversation in which his name came up. “He was an amazing guy” said Dave, “ you know when I became treasurer he rang me every week to check on things and nearly every time he would finish the conversation by saying, “now Dave let’s just keep this between ourselves and you can ring whenever you have a worry.” Alan Trent responded saying, “well Dave I’m sorry to tell you this but when I was secretary he said exactly the same thing to me!” In the same vein is the story that Tom George, the club captain in the halcyon days at Bangor Street in the 1970s, was required to meet Beau every Monday and detail the weekend’s events and plan for the next week. These antidotes tell us something of Beau’s professionalism and astuteness but they mask the passion this man had for the Christchurch Club. Suffice to say that just as John Anderson was the dominant figure from the 1870s through to the 1920s, the padrone as it were, so too was Beau Cottrell the godfather - from his playing days in the late 1920s through to his final stanza as club patron, he was the embodiment of the ‘Christchurch man.’

At the time of his passing Keith Torrance wrote, “We are proud that Beau chose Christchurch as his club; we are the richer for all his years of membership, we are the poorer for his life’s span having ended.”

Beau Cottrell’s rugby career transcended one of the major transformations in the game’s history in New Zealand. This was the change from the 2-3-2 scrum formation, with the wing forward in attendance; to the 3-2-3 line up and eventually today’s 3-4-1. He was the in the last two man front row and the first 3 man scrum, a move that was resisted by the NZRFU but forced by the home-union controlled IRB after the events of the British Lions tour of New Zealand

Born in Westport he attended Christ’s College and played in the 1st XV for three seasons, 1924-1926. On leaving college he was approached by the Christchurch stalwarts Arnie Hughes and Mickey Seed who hinted there was a spot for a hooker in the seniors. Tommy Tothill, his old Christ’s College coach got wind of this and met with Cottrell advising him not to play seniors too soon. Reluctantly heeding this message he joined the Old Collegians club playing firstly in 3rd grade and then in the Senior B grade. His move into higher levels was fortuitous as he explained in 1983.

In 1927 he was chosen for the Senior Reserve representative team, “we were training under the lights at Hagley Park when one of the selectors of the Canterbury B team came over and asked if we would lend them a hooker for training as one of their team had strained an ankle. I was asked to go over and I was thrilled and ran, and pushed and did everything just as hard as I could. I was then chosen to play for them at Ashburton on Saturday. I was to hook with a tough guy, Archie McCormick (Fergie’s father)…I greatly enjoyed the game which we won.”

From this point his rise was meteoric. In 1928 he joined the club and was part of a very strong Christchurch combination that would vie for the championship for two seasons then win it in 1930. In 1928 he played all of Canterbury’s 8 fixtures including two Ranfurly Shield matches and in 1929 played for the South island and successfully trialed for the All Blacks, being selected for the 1929 tour of Australia. On this tour he played in all three tests that the All Blacks lost but this did not count against him because in 1930 he played all four tests against the British Isles.

Reflecting on this series in 1983 he wrote, “George Hart and I were selected to play for New Zealand. Canterbury beat the British team by 14 to 8, a great game. I was lucky enough to be chosen as a hooker in all four tests. In the first test I hooked with the famous Bull Irvine and the next three with Jack Hore. Though we lost the first test we won the other finishing with a magnificent performance in the fourth test in Wellington. This was the last game for NZ of Cliff Porter and what a game he played. The team trained at the beach at Otaki and never did a fitter team ever take the field…”

1931 saw Cottrell a member of the Canterbury team that won the Ranfurly Shield from Wellington and then beat the touring Australians. He also played in the test against Australia, the last in which New Zealand used the 2-3-2 scrum formation. He remembered the 1931 season with great fondness. “I remember it as a happy year for me because I had completed my legal exams and was therefore able to devote a lot more time…to playing the game which I loved with all my enthusiasm and energy. I was very fit that year.”

At the end of the season Canterbury challenged Wellington for the Ranfurly Shield and succeeded in winning thanks in part to a defensive blunder by the legendary Mark Nicholls. “We had a scrum on the Wellington 25 line and we hooked the ball for Tommy Mullan our half back to toss it out to our first five-eights. He was marked by Mark Nicholls who immediately started to move out to cover Charlie Oliver at centre. Gordon Day picked his movement and shot through to score near the posts.” Legend has it that the strong willed Nicholls was stunned at his lapse having over-read the play entirely and proceeded to blame his fellow backs.

His second tour to Australia came in 1932, where he appeared in nine of the eleven matches, including all the tests. He continued to play for Canterbury for a further two seasons, but declined selection for the 1934 All Black tour of Australia because of business pressures. Jack Manchester, his great mate from Christchurch, went on to captain the 1935 team to the British Isles.

Would Beau Cottrell have captained this team if he had been available? The answer is buried in the depths of time but given his fine record as captain of Canterbury, his captaincy of the South Island in 1933 and his general standing as an All Black he would have had to be a contender. Perhaps like Frank Kilby he declined rather than have to deal with the whims of Vincent Meredith, the manager. His son Richard said that the family view was that he was invited but declined the invitation, citing the fact that he was recently married and times were tough during the depression. Richard said that his sister Anna had said that Beau, “was sad for quite a time” and this was put down to missing the tour.

Following his retirement from international and representative rugby he continued to play for Christchurch for a number years, often as a player coach. There is no doubt that within the club his popularity and standing provided solidarity and success. Between 1930 and 1939 he served on the CRFU and in 1955 he commenced a 22 year term as president. During his watch the club won several senior championships, moved the clubrooms to Bangor Street and celebrated the clubs centenary successfully in 1963. During these years the clubs membership was large and the number of teams impressive. He presided over these triumphs from a distance and with modesty and restraint. Perhaps his war time experiences, severely wounded as a prisoner war, prompted his service to the Club for he like so many of his generation, determined that post world war New Zealand would be a better place and the Christchurch Club was a beneficiary of this commitment. 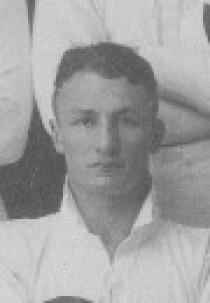