Writers who have written All Black pen portraits have invariably used a quote by the manager of the 1884 tour of Australia to describe George Helmore one of the Christchurch Club’s first All Blacks. Samuel Sleigh, the manager, said of Helmore at the end of the 1884 tour that, he was “a changeable man -- at times he would play brilliantly and on others quite the reverse.” In some ways it is a condemnatory reference and it is a pity that it has been frequently re-quoted because research reveals that George Helmore was, as much as can be ascertained from historical resources, a solid citizen, a god-fearing man and a sportsman who excelled in several codes before turning to a period of distinguished service as an administrator. Further research would show that he was a man of some substance and standing and a man of wit and intellect. In short George Helmore was a good man and Helmore the rugby player was capable of playing to the highest standards and, moreover, he possessed leadership ability of the highest order captaining both his club and his province.

He was educated at Christ’s College educated and was a member of the 1st XV in the 1879 and 1880 seasons. Given this educational background it is safe to assume that he belonged to the more affluent classes of early Canterbury and certainly his later life as a lawyer and a subsequent term on the Board of Christ’s College indicates a man of some means. In a way he is the atypical Christchurch player of the pre 1900’s period.

It would seem that his first game for Christchurch was in the 1880 season when he was named to play against North Canterbury while still school. A week later he was playing for College against the club and earning praise for his play, “making some splendid runs” and along with JCN Grigg - of Longbeach fame, was praised for very good, “service for their side.” A skilled back he generally played as a quarter but later in his career played in the halves. Between 1880 and 1884 he was a regular for Christchurch and also played for Canterbury. He was also a member of the club executive and was deputy club captain for three years.

His biography on the All Black website states that, “he was a creature of moods, which was frequently reflected in his rugby” but there is nothing in the match reports in either the Star of the Press that suggests he was anything but whole-hearted. The most critical observation seems to have been in 1881, in a match against Ravens, when the reporter commented that “the quarter backs Anderson and Helmore, …seemed to have wakened up at last…making rush after rush.”

In 1884 he was elected for the New Zealand team that toured NSW. and appeared in seven of the nine matches, three as a wing, three as a centre and once as a halfback. Prior to the tour the Star published a critical player preview and wrote of Helmore that he “has played quarter back for a number of years. Dodgy and quick at kicking, but can never be induced to pass - a habit he will find it necessary to break himself if he expects the selection committee to give him a show Sydney.” Whether he became less selfish is not known; however, he was selected for the match against NSW and featured several times in the match report. The most informative of these comments came as New Zealand was pushing to the NSW line, “…Carter securing the ball from the throw out, about 20 yards from the New South Wales line, passed to Helmore and he made a long pass to Warbrick [who]…sent the ball flying over the bar.” On the tour he scored three tries in the second match against Cumberland County and dropkicked two goals against Northern Districts at Newcastle.

Helmore moved to live in Rangiora after the 1884 tour and continued his rugby career for North Canterbury. His play frequently drew favourable comment in match reports for either North Canterbury or Canterbury with his tricky runs being a feature of his play. Although living in the country he remained on the committee of the CRFU for a number of years and was for a time a selector. He led Canterbury to their two wins over the touring New South Wales side in 1886 and appeared twice for the province in the first two of their three matches against the Great Britain tourists of 1888.

In the match against NSW on 08 September 1886 he was a key figure in Canterbury’s victory. Playing at half back he earned praise for his dribbling and “dodging runs”. Two years later he played against the touring British team and it was at the dinner that another side of his personality emerged. The reported summary of his speech is worth repeating in part because it shows Helmore’s understanding of the game and his sense of humour.

The Star report of 07 May 1888 read that “Mr Helmore had the important but unpleasant task of replying to the toast of the losing side. However to his mind, the next best thing to being on the winning side in a game of football was to be on the losing side. They had tried to win but couldn’t do it (loud applause). His side had done well enough in the first spell and it was a pity this spell couldn’t be encored (laughter and applause). Anyway he knew that the visit of the English team would do a great deal to improve football throughout New Zealand. Most of them would remember the old slow game they used to play, in which the scrimmages had been likened to a lot of fellows trying to hatch out a ball (laughter). Since then they {Canterbury] had tried to improve their football and make it a fast game, and there was no hatching out the ball in Christchurch. Screwing the scrimmages for instance, and the admirable passing and backing up of the English team, the like of which had never before been seen in Christchurch. He hoped that his team would try and imitate the admirable way in which the Englishmen played this part of the game… (Loud applause)”.

In addition to his skills as a rugby player Helmore was a good cricketer, representing Canterbury briefly and continued to play this game for many years. In his younger years he was a fine athlete often appearing in local meetings and occasionally running against his old school mate JCN Grigg. His work in the community extended to membership of his local parish, participation in group singing and service in the Rangiora Rifle volunteers where he was a very good shot, eventually rising to the rank of Lieutenant. 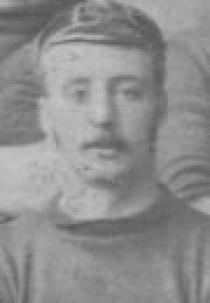